To succeed in business, all you need is a steady series of small, incremental changes to your products and services. 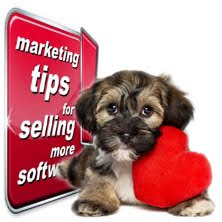 So says Phil Dusenberry, the former chairman of BBDO North America, one of the largest advertising firms in the US. There's no need to make the sales needle jump, Dusenberry believes. You just need a steady flow of small changes to succeed.

Dusenberry explains his business ideas in his book "Then We Set His Hair on Fire." The book title is a reference to BBDO's creation of the Pepsi TV ad in which Michael Jackson had an unfortunate accident.

There's a fascinating story in the book about one of these small course-correction changes. I believe that the story is instructive to those of us in the software industry.

Dusenberry's company landed the Campbell's Soup account in the 1980s. Soup sales were stagnant. So BBDO did some serious research, and learned something unusual - lots of consumers had cupboards full of Campbell's soup.

Campbell's Soup had been advertised for decades as a safety-related product. It's virtually non perishable, and you need to keep it in the house for health and medical emergencies. Campbell's Soup ads urged people to buy cans of soup for their cupboards.

Oddly, there was a major disconnect between the purchase rate and the consumption rate for soup. There's a similar problem with try-before-you-buy software. Most software companies tell their prospects, over and over, that they should download their software.

Lots of people listened to both the soup and the software messages, and acted on them. They filled their cupboards with cans of soup (but didn't eat very much of it.) And downloaders grabbed lots of software trial versions. But about one hundred times as many people download software as buy it, so the "download" message (but not a "buy" message) is being read, understood, and acted upon.

How did Campbell's solve their problem of flat soup sales? They changed their ad campaign to stress the benefits of consuming soup, and not just buying it and storing it for emergencies. The new tag line was "Reach for the Campbell's. It's right on your shelf." People started consuming the soup that they had bought.

What might software developers do to get more people to buy the software that they've downloaded?

The simple answer is to urge prospects to buy your software rather than nudging them to download it. The success of this approach depends upon the type of software that you offer, and the audience that you target. For example, if you're selling programmers' tools, then your target audience is very comfortable downloading, installing, and experimenting with software. In fact, most programmers would be reluctant to buy any software without trying it first.

By contrast, many home users will buy software if it has been recommended by an expert. It's possible that testimonials and recommendations can get many prospects to bypass the "try it" stage, and move directly to the "buy it" action.

For most software developers, there's no way to reliably predict if their prospects might be amenable to buying the software before trying it. The only way to know for sure is to experiment. Document your current sales levels. Change your sales presentation to emphasize sales rather than downloads. And measure sales again.

Be sure to think through your support workload. If you have an application that's targeted at tech-savvy users, and you convince a significant percentage of non-tech prospects to buy your software without trying it first, you may find yourself on the phone providing support to people who don't have the technical knowledge to use your software.

Another simple solution to getting more software sales is to create a one-page instruction sheet that downloaders can print and use as a reference. Such a sheet can help prospects overcome a lot of the problems that discourage them from buying your software.

Start your Instruction Sheet with a date/time stamp, followed by a description of your Widget software. Say something like, "Thank you for downloading Widget, the Windows powerhouse that saves you time and money every week by doing this and that." This will remind users why they downloaded your software in the first place.

People are interested in security. Say something like, "Widget is safe and easy to install. In just a few minutes, you'll be saving time and saving money with Widget." Next, rekindle their interest in your program by reminding them of the most powerful benefit that it delivers..

Include a quick-start guide for experienced users, and detailed instructions for newbies. Tell them the name of the download archive. Offer a coupon code that they can use in the next 72 hours to buy the full version of your application.

Selling Software
at Each Decision Point

To sell more software, microISVs need to address each of the decision points where consumers are dropping the ball. And by encouraging downloaders to print your instruction sheet, you could substantially increase sales.

One mistake that some developers make is naming their download archive something blah like "setup.exe". Even if a prospect remembers to look for your installation file, they may find it in a folder full of .ZIP or .EXE files with names that won't help them remember why they downloaded your trial version. Use a meaningful name so prospects will be able to find the program after they've downloaded it.

Some people install the trial version, intending to try it later. And they forget about it. Or when they try it a month later, the trial version has expired. Having a printed instruction sheet can remind them that they've installed a new application, and that they need to give it a workout.

Many developers do not provide a quick-start guide, a library of tips of the day, or easy-to-find sample files that can get their prospects using the software quickly and easily. Prospects who have downloaded and installed your trial version run the program, find no obvious place to click to start using it, and abandon the software in frustration.

By identifying every decision point where users can either buy the application or not, it's possible to find simple ways to entice them into making a buying decision. Some of these changes might be as simple as Campbell's Soup urging their customers to eat the soup that they had previously been stockpiling. Maybe it's as simple as urging downloaders to print your instruction sheet.